A dear friend of Monsieur's from Atlanta, GA, sent him a huge bag of pecans.

And off I went to google some recipes, of which I found many, each involving a mythical ingredient called corn syrup.  I've never used corn syrup in my life and, quelle surpirse, my local supermarche doesn't stock any.  So I decided to concoct my very own version of corn syrup, based on what I had in the cupboard, and what I assumed corn syrup to be: sticky and sweet.

Below is a photo of the ingredients I assembled.  The black treacle was left over from last Christmas' gingerbread cookies and the maple syrup was in the house because I'm Canadian.  I figured these two sticky and sweet substances (I assumed black treacle was sweet - who knew?) could be passed off as corn syrup under duress. 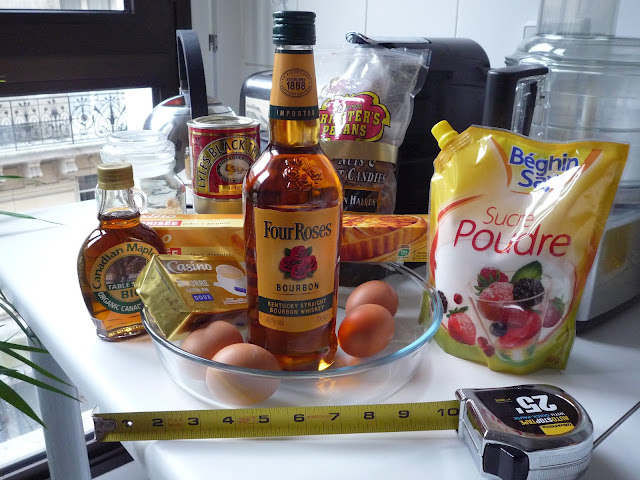 Below is a screen-grab of the Martha Stewart  recipe that I meant to follow.  You will notice that it calls for a 9 inch pie plate (mine was 10); 1 disc of her Basic Pie Dough (yeah, right) and no Bourbon.  I'm sure  Bourbon was included in one of the other 'authentic Southern Pecan pie' recipes that I'd found online, and unlike corn syrup, my local supermarche does stock Bourbon.  Some things are meant to be.

A few easy minutes of (ersatz) ingredient blending later, I had what looked like a pecan pie on my hands. 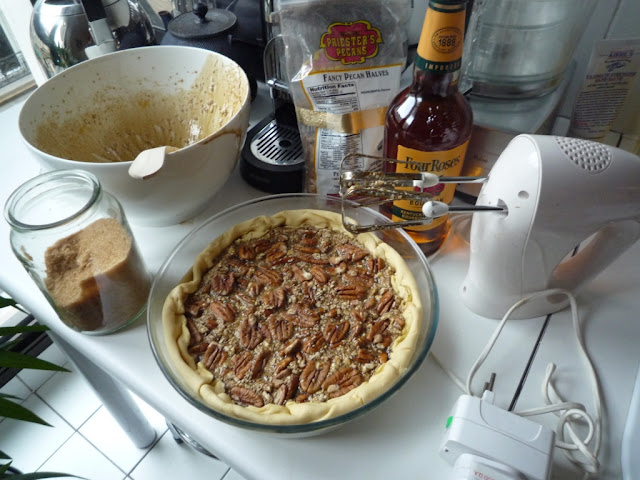 And 40 minutes later, what looked like a pecan pie came out of the oven! 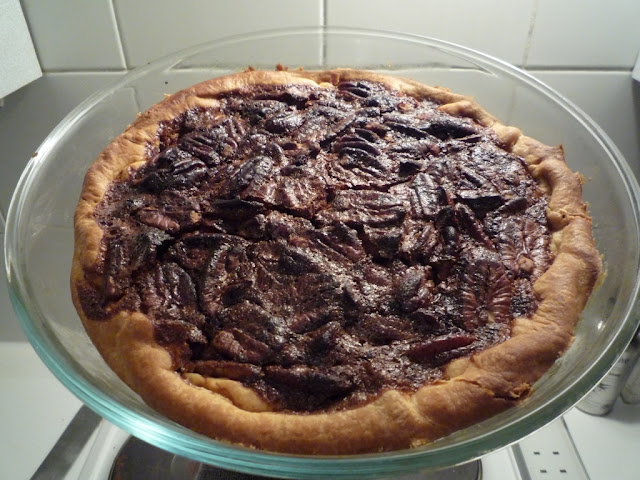 It came out of the oven 20 minutes before it was supposed to because I thought I smelled something burning. (The Christmas ham indecent taught me a valuable lesson about the speed with which maple syrup can carbonise.)  But it looked okay, and as we all know, it's looks that count.

A few hours later it was cool and ready to serve and the result was surprisingly edible.  Monsieur enjoyed two slices, declaring my pecan pie a winner.

Email ThisBlogThis!Share to TwitterShare to FacebookShare to Pinterest
Labels: Don't Call Me Martha