A Rose by Any Other Name is a Strawberry

The first Sunday of every month, Monsieur and I have dinner with the Bourdins.

Pierre Bourdin is Monsieur's best friend from when they were 19. Monique is Pierre's very pretty, very sweet wife.  Pierre and Monique are a lovely couple; they've done a great job at raising a brood of charming boys and Pierre is obviously besotted with Monique.

Unfortunately, like many a French man, Pierre seems besotted with the entire gender.  That includes me.  So the first Sunday of every month finds me in baggy clothes and a ponytail in a bid to placate an increasingly wary Monique.  On alternate months, it also finds me in my kitchen, preparing a very simple, fuss-free meal.  "NO FUSS!" was the strong reaction I received for preparing 3 courses with cheese.  Lesson learned.

So, this time I decided to make a fuss-less melanzane parmigiana from the eggplant that was getting squidgy in the fridge, with some of my permanent stock of bresoala and prosciutto to start.  Couldn't be easier.  But having landed on an Italian theme, my thoughts turned to tiramisu for dessert, which would be more of a challenge.  While rummaging around the cupboard for alternative ideas, I found a bag of Fossier Rose Biscuits - a Christmas gift from Monsieur's aunt that I'd been meaning to throw out but didn't, kinda like the eggplant.

What follows is the resulting dessert. 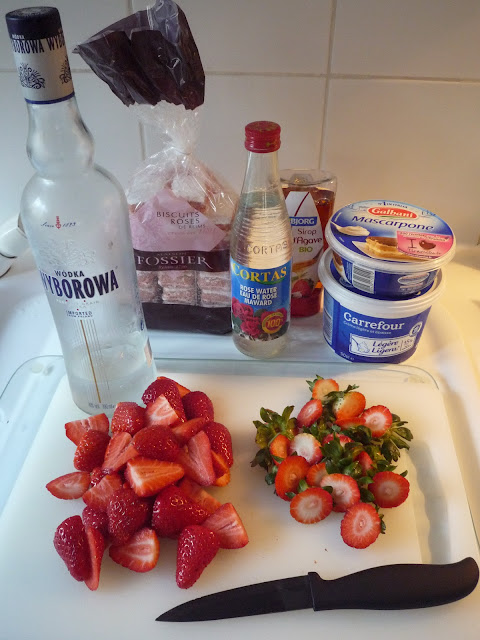 Determined to use those rose biscuits, and recalling a strawberry and rose flavoured dessert that once blew me away at Claridge's in London, I popped out to pick up some strawberries from my local mini-market (now open Sundays - a novelty in France) and a container of mascarpone.  The rosewater was something that I already had on hand, left over from an earlier attempt at Iraqi baklava (don't ask).  The vodka needs no explanation. 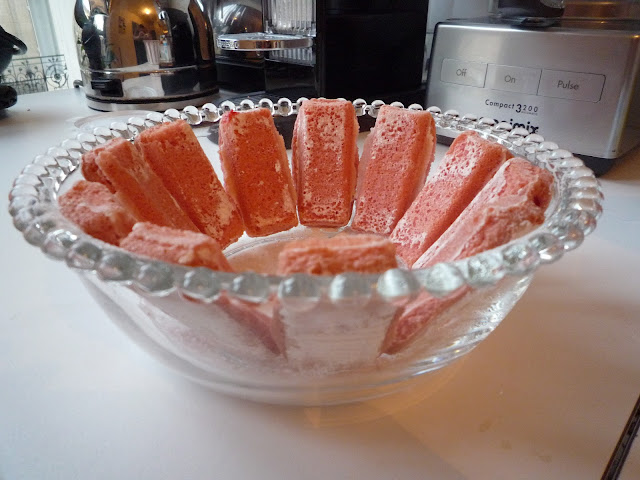 I arranged the biscuits around the perimeter of a presentation bowl like this.  I have no idea how many I used but if you really want to know, feel free to count. 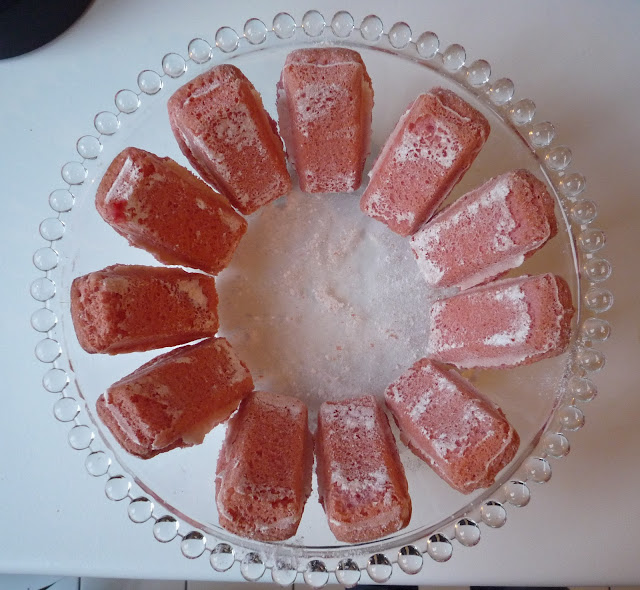 In another bowl I combined the mascarpone, creme fraiche, agave syrup and rosewater.  The agave syrup wasn't quite sweet enough so I sifted some icing sugar into the mixture.  The result was awesome.  The flavours were so light and fresh and candy-like that I didn't want to risk ruining my rose-scented confection by adding vodka, so I drank a shot instead.

I then added the strawberries to the cream mixture and plopped the lot into the rose-biscuit lined bowl. 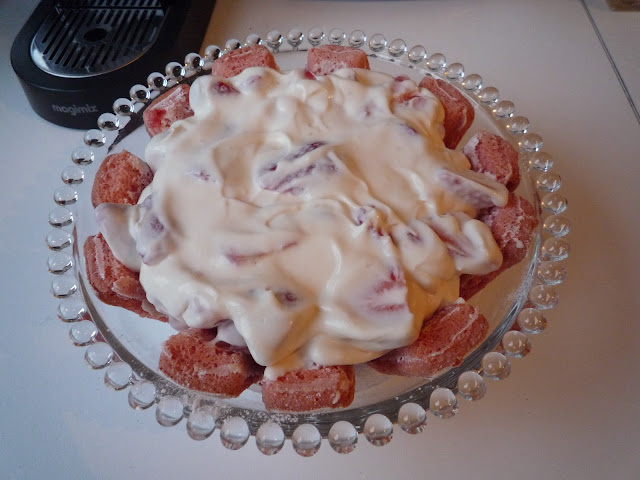 It took less than 10 minutes to prepare (20, if you include the trip to the shop, 21 if you include that shot of vodka) so definitely ticked the 'no-fuss' box.  But when I took it out of the fridge and served it to the Bourdins a few hours later, well, let's just say that it caused quite a stir.

Style File Followers Take Note:
1. The names have been changed to protect no-one but me.
2. A showercap was used to protect my dessert from the Italian charcuterie smell in the fridge.  (See Kahlua Fudge Cake for that top tip.)
3. Here's a link for the rose biscuits, which, incidentally, are rose in colour but not so much in flavour.  Another lesson learned.

Email ThisBlogThis!Share to TwitterShare to FacebookShare to Pinterest
Labels: Don't Call Me Martha