It may not have been the full-on, red carpet, let's-snort-something-on-P Diddy's-yacht whirlwind that some might expect, but in three short days I experienced more glam than I ever dare get used to. 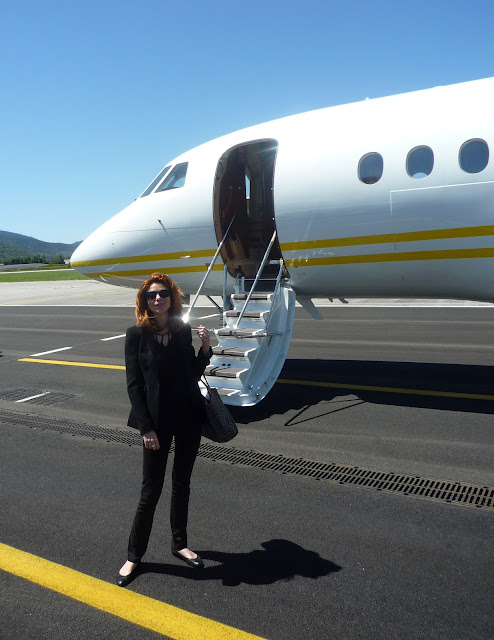 That's me, about to board a private jet.  The last time I boarded a jet, it was a Finnair flight filled with a hundred Goretex-clad Arctic adventurers.  At least this time my handbag was in its element. 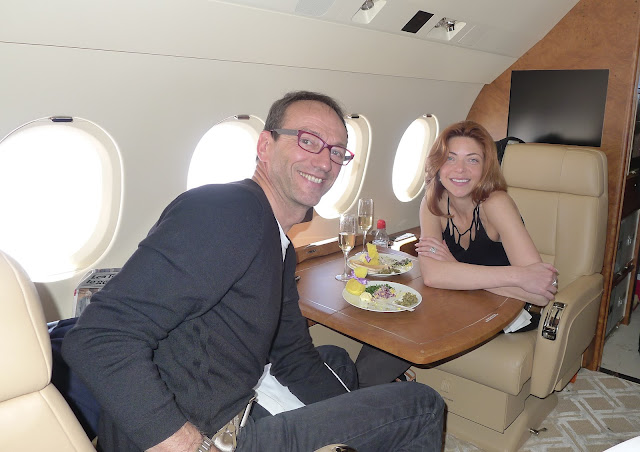 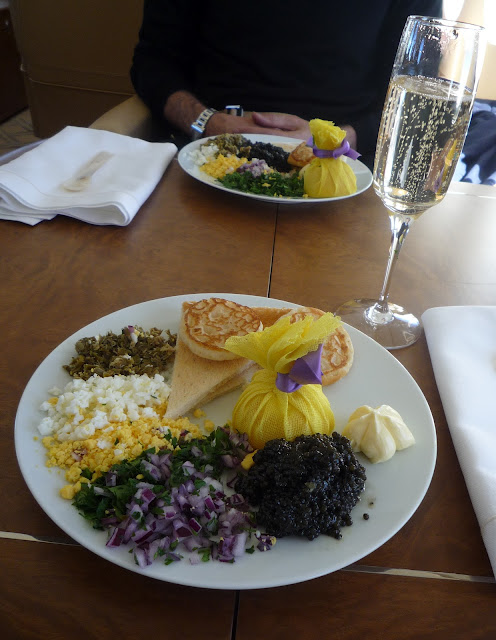 That's me and Monsieur at 40,000 feet.  Our in-flight snack consisted of Cristal and caviar (Beluga, darling) with all the trimmings.  You don't get that on Easyjet. 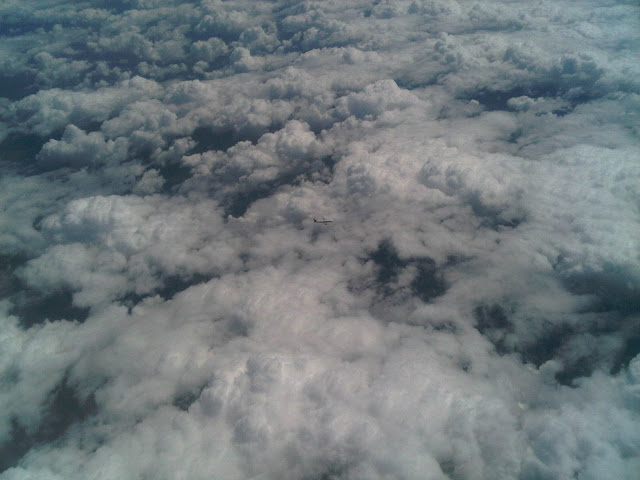 You see that little speck of a plane a few thousand feet below us?  That's the Easyjet flight to Nice. While it was always obvious that seat selection on a private jet would beat Speedy Boarding hands down, I had no idea that private jets fly higher than commercial airlines.  You learn something new every day. 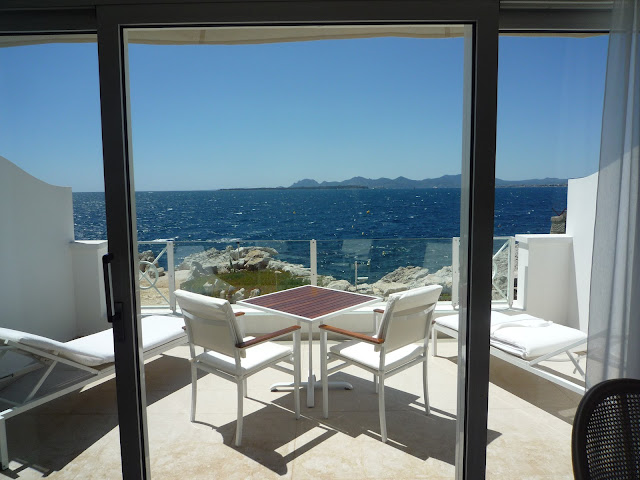 A little more than an hour later we arrived at our destination, the Hotel du Cap Eden Rock, the hotel to see and be seen in during the festival  - or any time, come to think of it.  It's a stunning hotel in a magnificent setting, steeped in jet-set history.  If you Google "celebrities + hotel du cap eden rock" you'll get what I mean.  The list of A-listers who have gazed out at this very view, possibly out this very window, is mindblowing.

Which explains why the view from our room also included this: 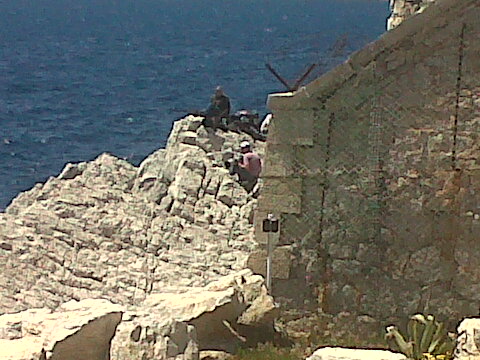 The only thing those 'anglers' are fishing for are shots of celebrity cellulite and Robert DeNiro (not necessarily in the same frame).  This photo was taken on the very first day of the festival.  By day three, the entire outcrop was crawling with paparazzi and the sea was filled with their bobbing boats.  An attendant told us that last year some clever paps sent an unmanned drone - US Army style - to shoot celebs from overhead.  The cleavage shots must have been canyonesque.

But that doesn't deter the world's glitterati from enjoying this magical, luxurious idyll.  Among the stars that shone there for me were Sasha Baron Cohen, his wife, Isla Fischer, Philip Seymour Hoffman and yes, Robert DeNiro.  I think I can add Warren Beatty to the list too, although I'm not 100% sure: It was either Warren Beatty with a few too many fillers and botox injections, or some other guy who's overdose on fillers and botox made him look like Warren Beatty.  (And such are the taxing things one contemplates while sipping Ruinart Rose by Eden Roc's breathtaking infinity pool.) 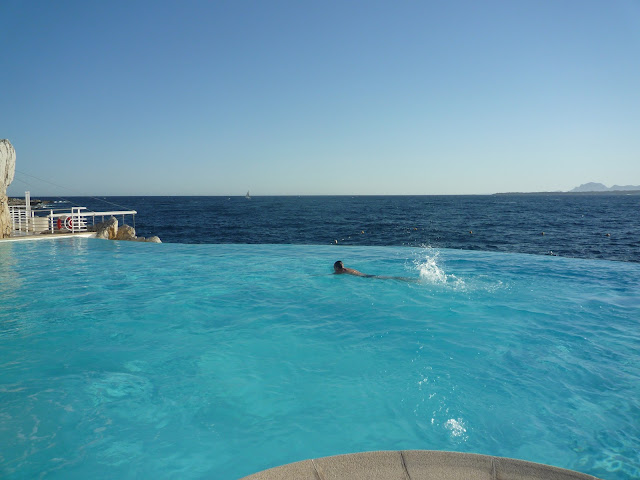 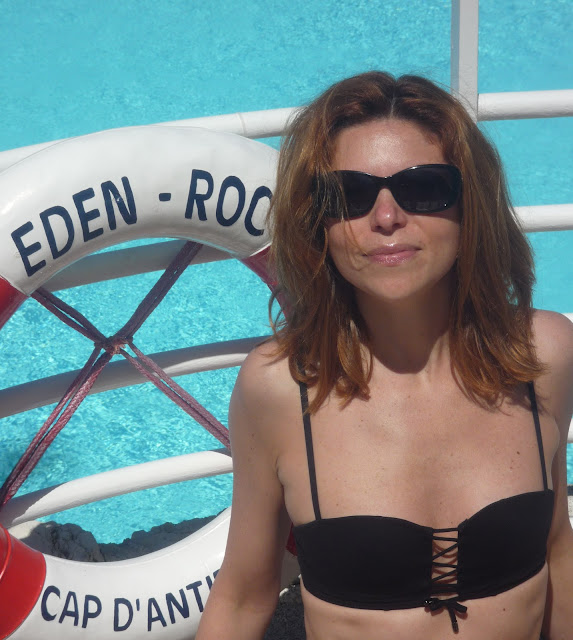 You bet I plan to Cannes again.

Style File Followers Take Note:
1. Not only do they fly higher; private jets also take off at a far steeper angle than commercial planes.
2. It's confession time: Technically speaking, I only spent a few hours in Cannes.  The Hotel du Cap Eden Roc is at the tip of the Cap d'Antibes, about 15 minutes from the famous Croisette.  But that doesn't matter.  If you're at the Edec Roc, Cannes comes to you.
3. Hat's off to Eden Roc's charming General Manager, Philippe Perd and charismatic Resident Manager, Laurent Vanhoegaerden, who do an amazing job catering to the world's most demanding clientèle. (Not to mention me.)
4. I'm mostly wearing Joseph in the top shots and the bikini at the bottom is Chantal Thomas.
5. The rest of my wardrobe choices will be discussed in Yes, We Cannes - Part II.  I know, the suspense is killing you.
Posted by Pepita Diamand at 21:48