Lucca Wherea We Stoppeda for Lunch

Had it not been overcast that morning, I don't think I could have left Portofino of my own volition.  Hotel Splendido had seduced me and rendered me helpless in its power.  I had fallen truly, madly, deeply in love.

But love's a fickle bitch, and as I said, it was overcast, so we packed the car and headed towards the Tuscan sun.

The drive between Portofino and the Chianti region is about 3 hours, following (though not overlooking) the Ligurian and Tuscan coasts. It then heads inland past Pisa and the turn off to Florence before winding its way through Chianti's hilly patchwork of vineyards and olive groves.

At the halfway mark, we had the choice between stopping for lunch in the fashionable beach resort of Forte dei Marme or Lucca, the medieval walled city renown for its ramparts and charm.  Lucca won and was a winner on all counts. The restaurant that was recommended - an inn dating from the 18th Century named Buca di Sant Antonio - served simple and delicious Tuscan dishes including stuffed rabbit, roast suckling pig and all sorts of variations on the bean theme.  (Beans are big in Tuscany.)

Powered by those beans - and a few good glasses of local wine - we started a walk around town, only to be stopped in our tracks just a few blocks away from the restaurant.  There we were, standing in front of the house where Puccini was born. 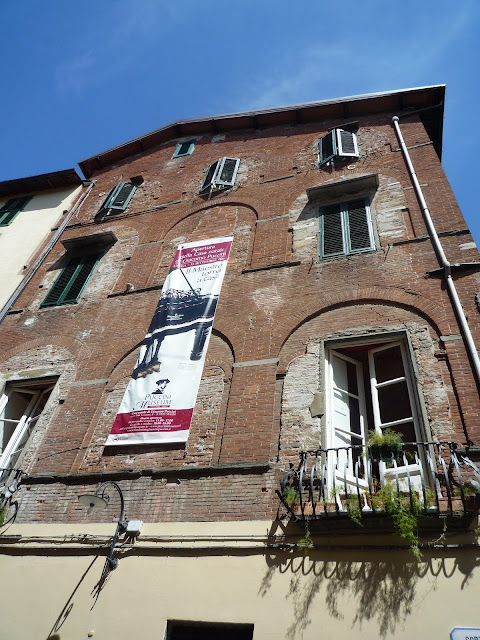 Monsieur and I love opera (opera is to Monsieur what Hotel Splendido is to me, at least when it's sunny) so to stumble across Puccini's birthplace and a museum filled with his original handwritten scores was a delight, not to mention total embarrassment, since neither of us realised the dude was from Lucca.  Intellectual credibility? Straight out the window.  And any remaining credibly was shot to hell when we both started crying like babies at the sight of Turandot's original costume.

Thank gawd that Tuscan sun was shining and we had to wear shades. 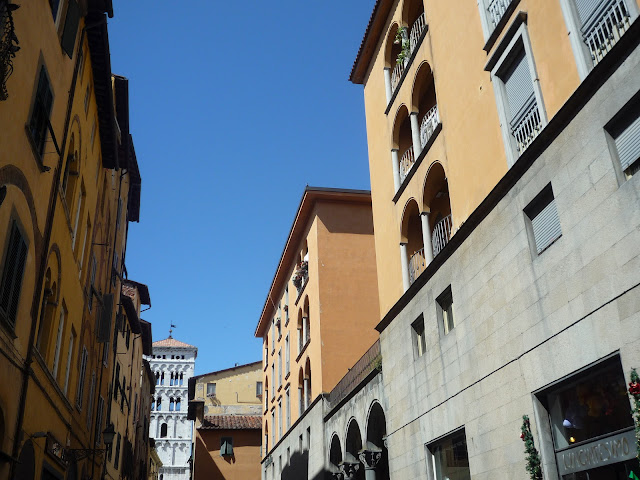 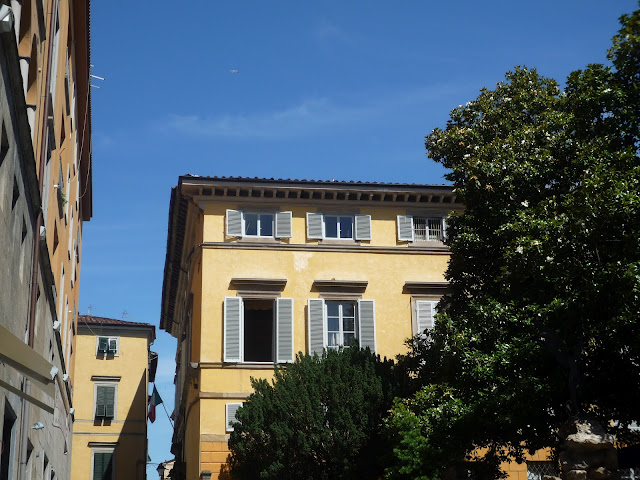 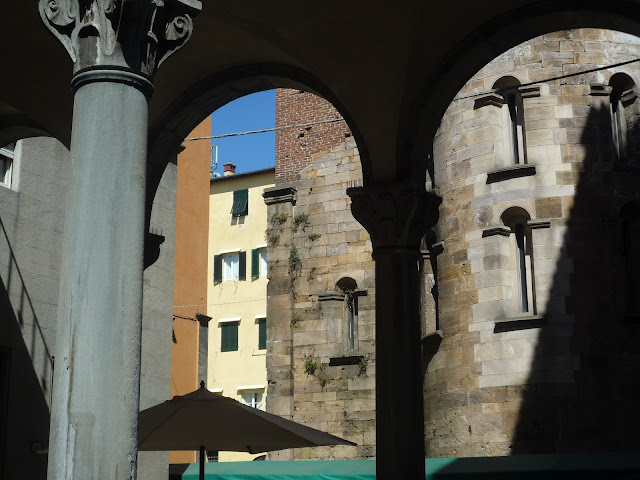 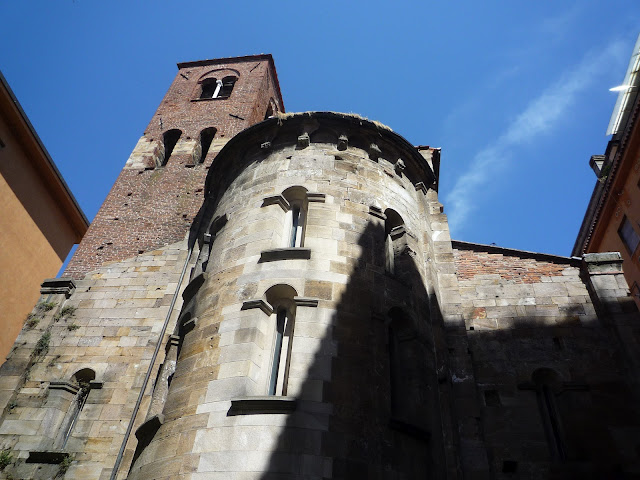 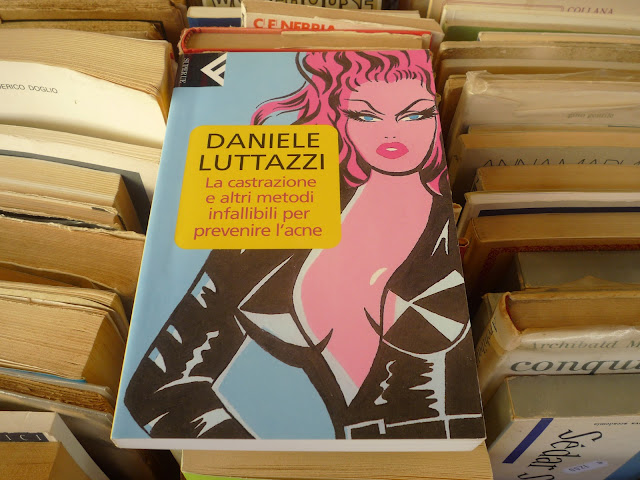 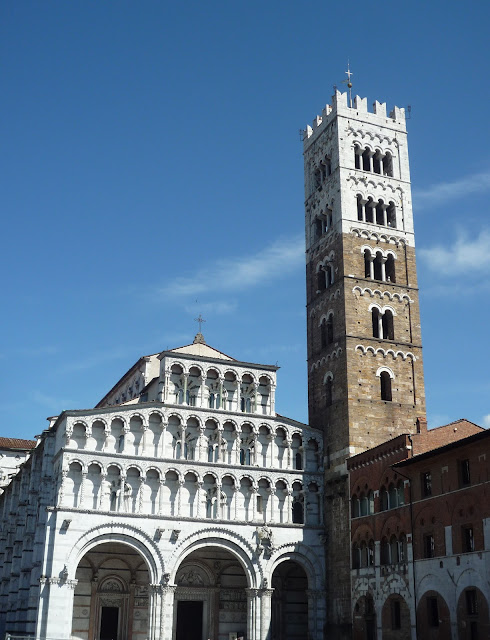 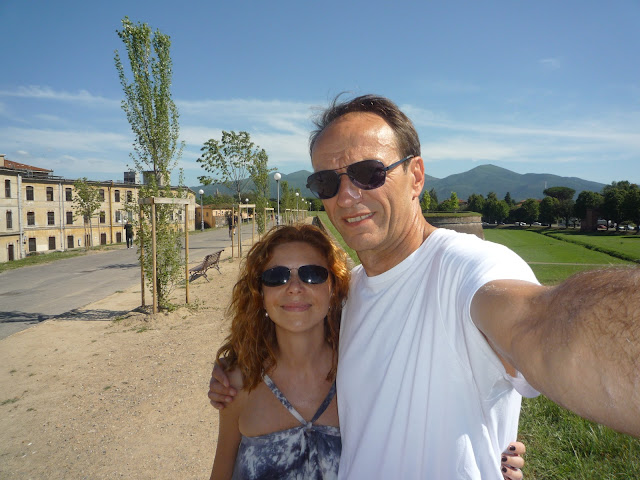 Style File Followers Take Note:
1. The highway along the northern Tuscan coast goes past Carrera, as in the marble, which is a marvel to glimpse from the road: Mountains of white stone that have been chiselled at and carved away for millennia and used for famous statues, enormous monuments, grand buildings and my neighbour's bathroom in Toronto.
2. To find out more about Buca di Sant Antonio click here.  And if you're ever in Lucca, go there.
3. Just go to Lucca, period.  It's pretty, laid back and not over-run with tourists like other Tuscan towns.
4. While walking around town, we came across a little book fair.  An Italian best-seller?
5. That's us, hiding our Puccini + red wine induced red-eyes behind our sunglasses on the ramparts of Lucca.
6. Next stop: Living the Tuscan dream and the Y-chromosome nightmare on my birthday.
Posted by Pepita Diamand at 08:53