(Lost) Under the Tuscan Sun

Have a look at this: 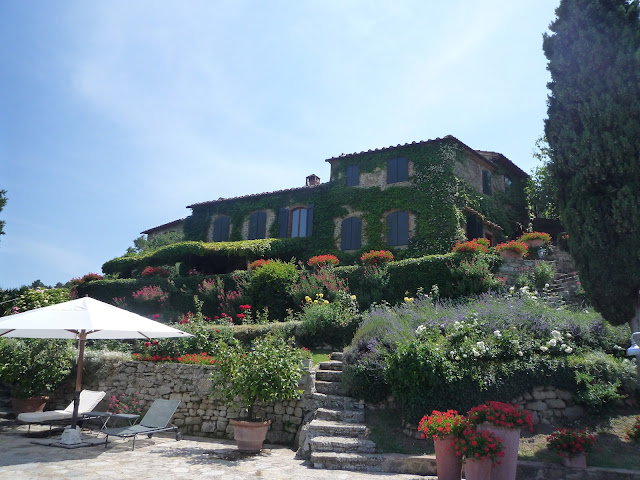 That's our friend's house near Panzano, which is smack in the middle of Chianti in Tuscany.  We'd spent a weekend there last September and loved it so much that we shamelessly invited ourselves back, this time for a week.

If you're sitting on a high horse wondering how we could have had the nerve to invite ourselves to a friend's house for a week, here's the view from the pool: 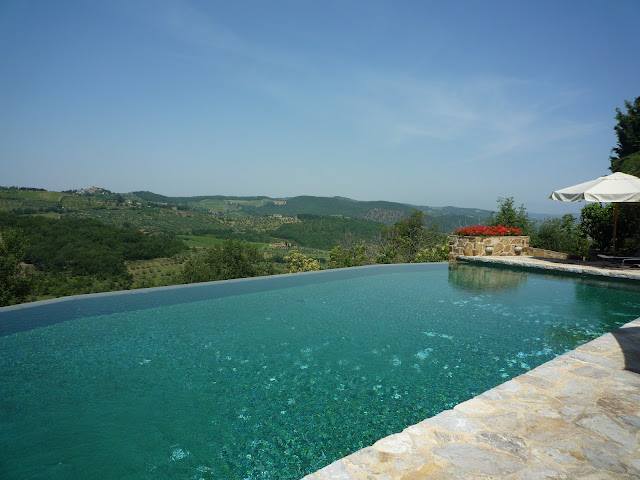 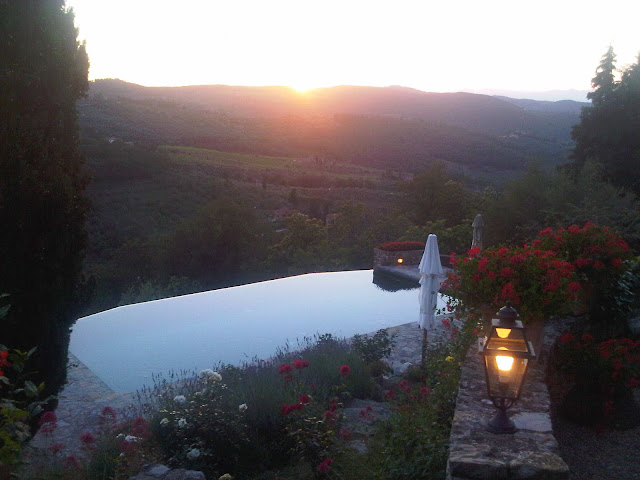 Was that thud the sound of you falling off your horse and scrambling to ask me for our friend's number? Thought so.

Staying at a friend's house in the (blissful) middle of nowhere meant that we had to fend ourselves.  So we stocked up on provisions. 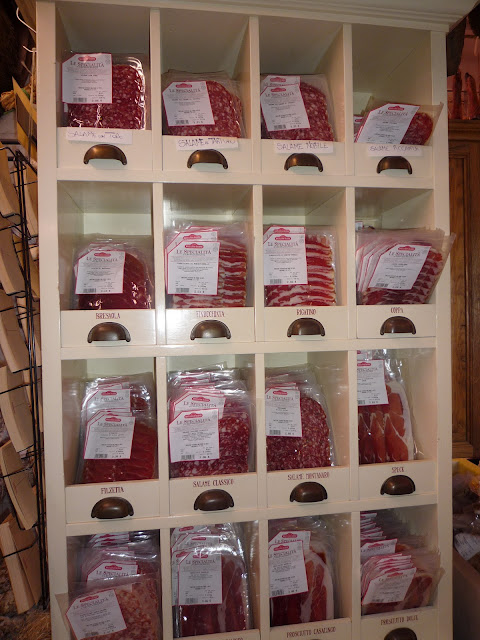 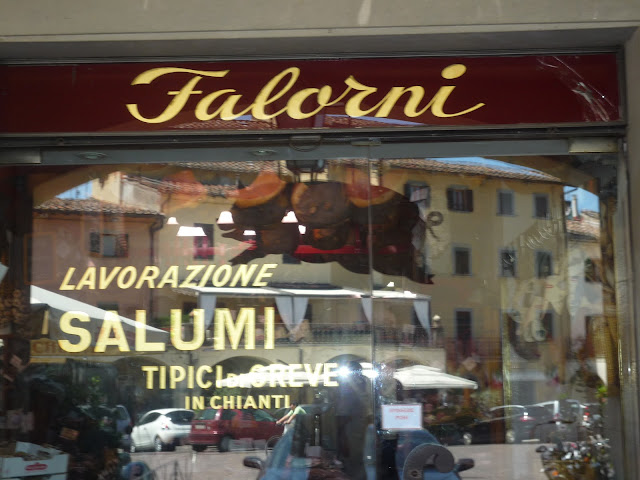 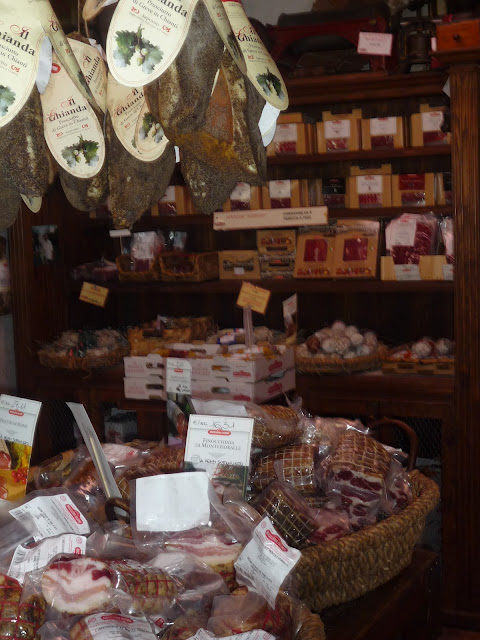 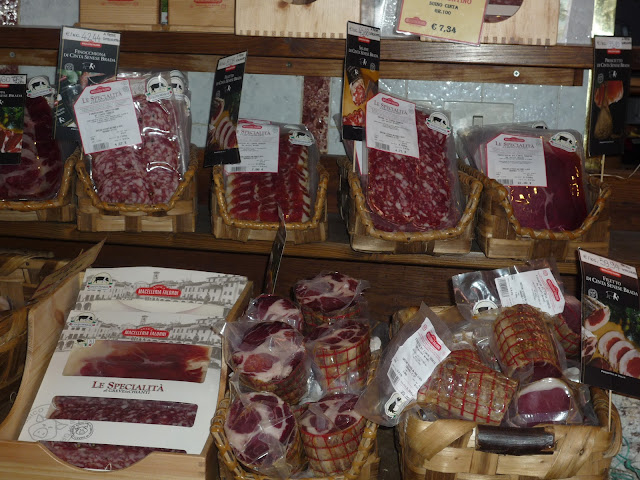 As you may have gleaned, Falroni in Greve is famous for its charcuterie.  It also offers a selection of amazing pecorino cheeses.  I asked the lady at the cash register if they had taleggio too.  She looked at me as if I'd spat at her mother.  Taleggio, she explained, isn't from Tuscany; pecorino is.  I should have known.

My birthday was in the middle of our stay and we decided to celebrate with a morning hike followed by  lunch at the house, washed down with a bottle of the most super of Tuscans, Sassicaia. The plan was to drive to the village of Lamole and follow a nearby trail, but that morning, clutching a local topographical map, Monsieur declared that Lamole was close enough to walk to.  So off we went. 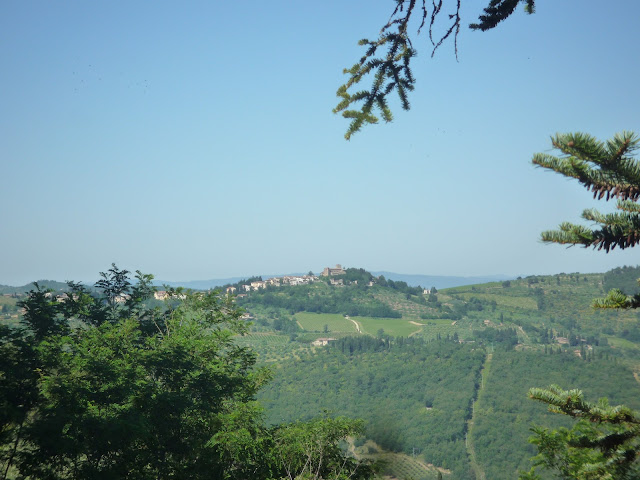 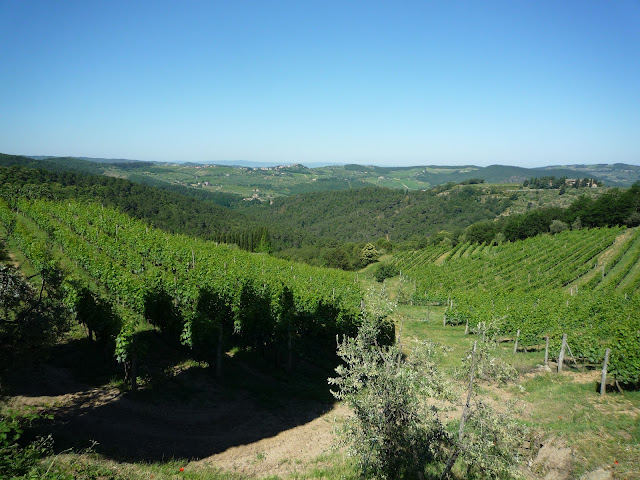 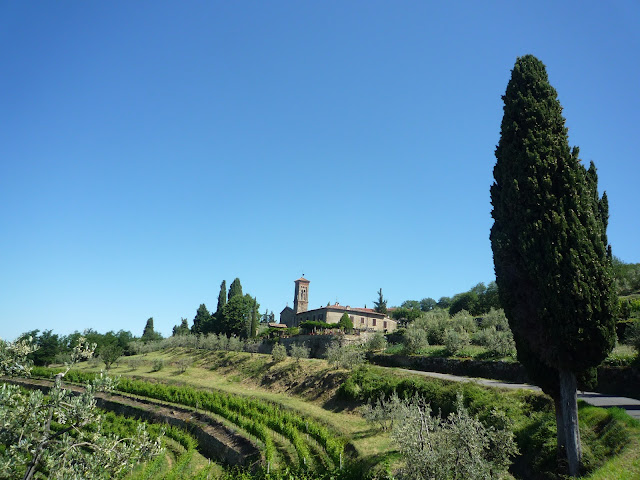 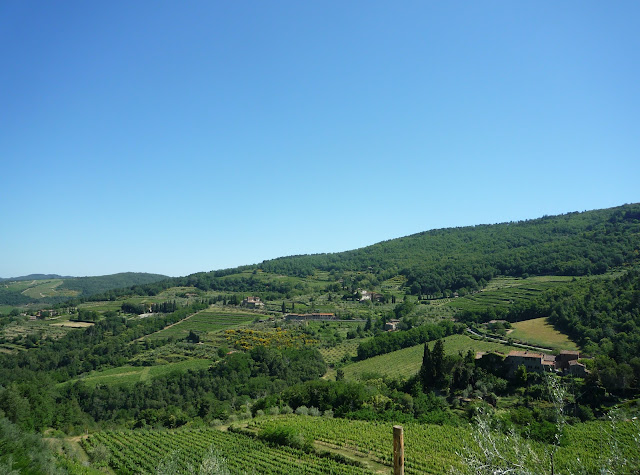 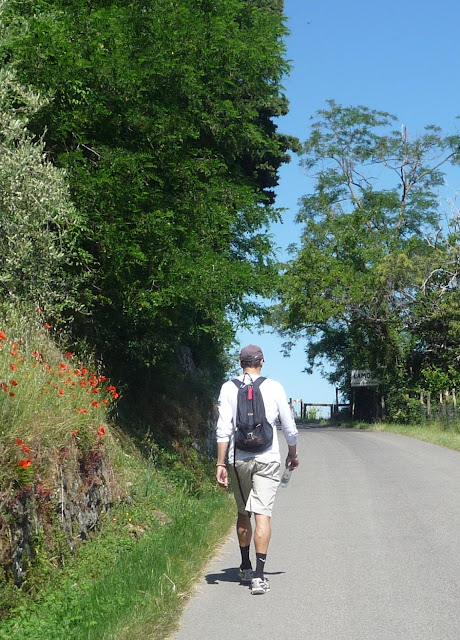 That photo of Monsieur was taken nearly 3 hours after our (mostly uphill) walk began.  Notice the sign to Lamole up ahead.  It was 11:30am and we were just approaching the starting point of our intended hike. If you ever wanted to know what good intentions looked like, take a gander at that asphalt.

The Tuscan sun was beating down and the Sassiccia was waiting.  So, we stopped for espresso and told the waiter our predicament.  Non c'e problema, came his response.  And he drew us a map and explained (in Italian) that there was a way back to Panzano through the vineyards (he drew those) and the forest (I recognised the word bosca) which would get us home soon.  Yippee, I thought. 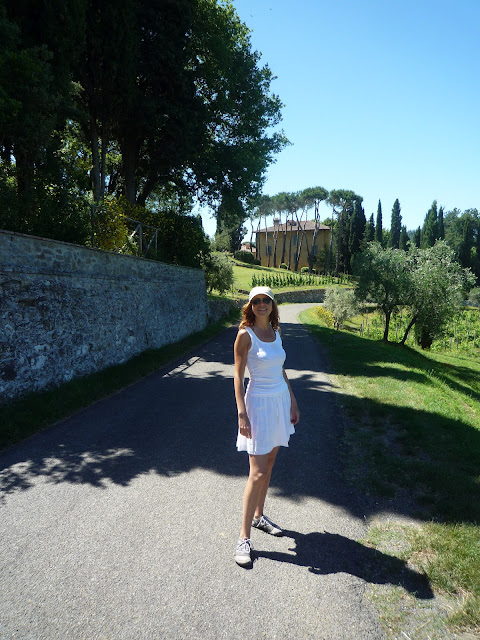 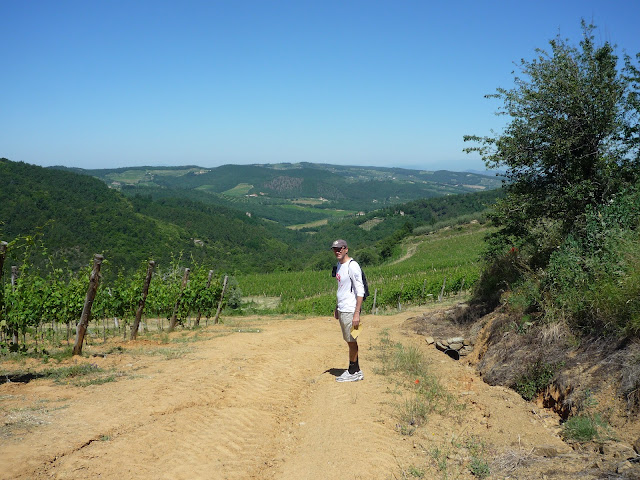 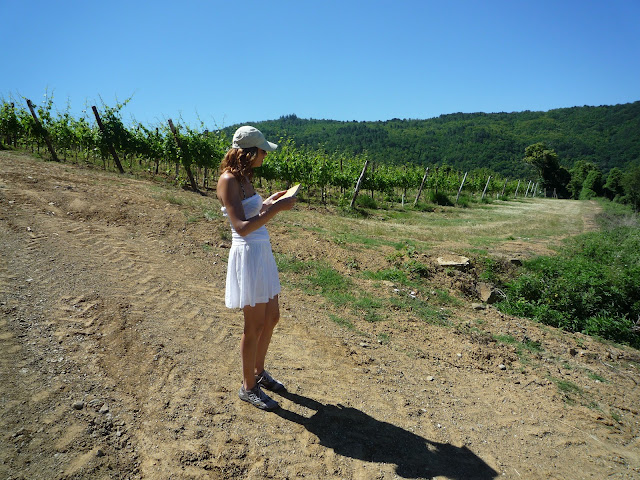 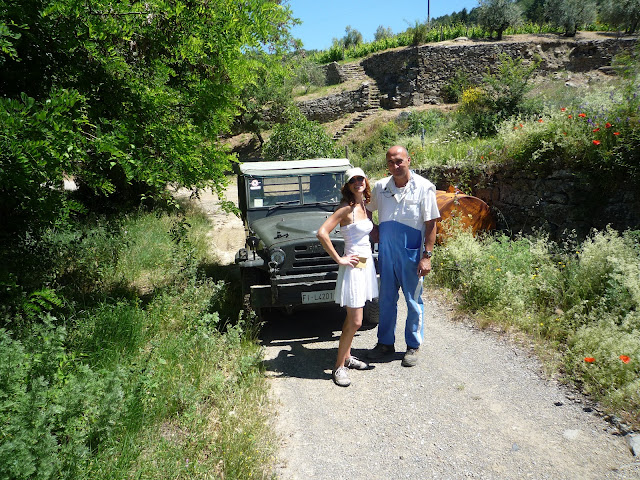 That's me and Rafael, our saviour.  Rafael saw us in the vineyards pouring over that hand-drawn map, first going one way, then going the other, then going through a gate and down a steep gully, then coming back up that steep gully forty minutes later.  He must have seen the arguments too. 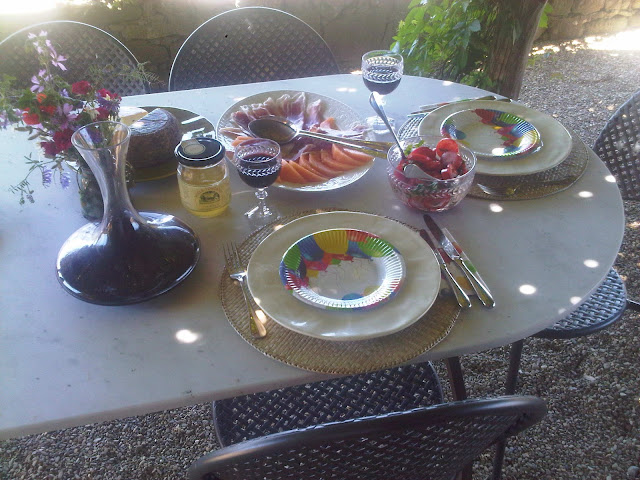 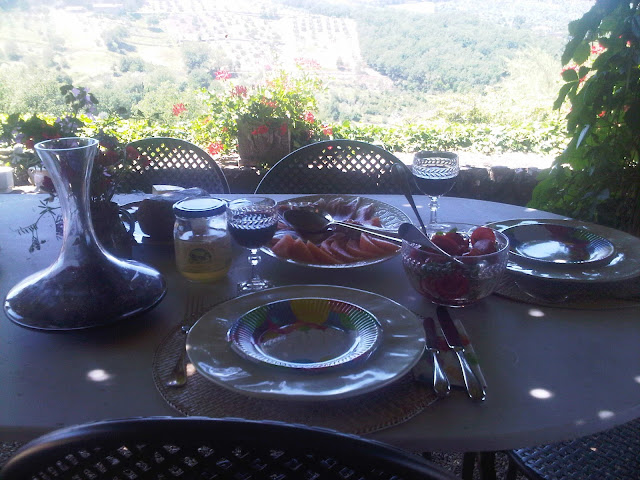 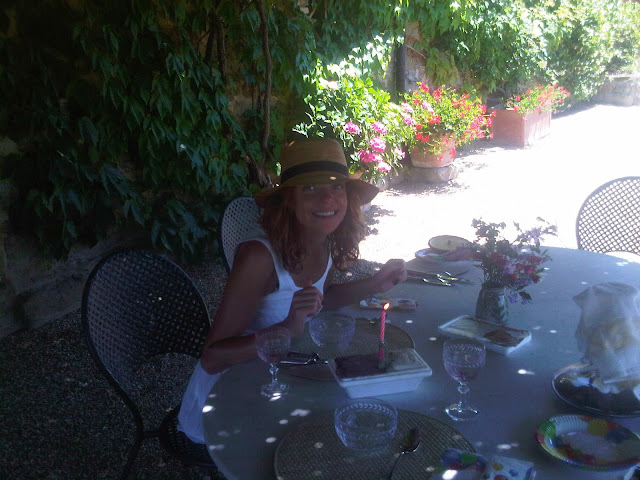 A little more than an hour after Saint Rafael's divine intervention, we found ourselves back at the house, sitting down to my birthday lunch of prosciutto e melone and truffled pecorino drizzled with local honey, followed by a brick of gelato as an ersatz birthday cake. There was no point making wish - it had already come true.


Style File Followers Take Note:
1. Our friends weren't at the house during our stay.  But we hope they'll be there next time, she says with a Cheshire cat grin...
2. They rent out their house sometimes, and one of their friends, Karin, rents and sells other houses in the area.  Visit her site here.
3. More about Falroni can be seen here.  (Do not click that link if you're Kosher or you'll need a Rabbi to come and kasher your PC.)
4. I elected to wear a lightweight skirt and tank top from the Gap for my birthday hike.  When I started to feel my shoulders sear under the Tuscan sun, I decided to roll down the straps: Better an all over burn than red shoulders and white tan lines was my thinking.
5. September 29th is the feast day of Saint Rafael.  I plan to.
Posted by Pepita Diamand at 09:21