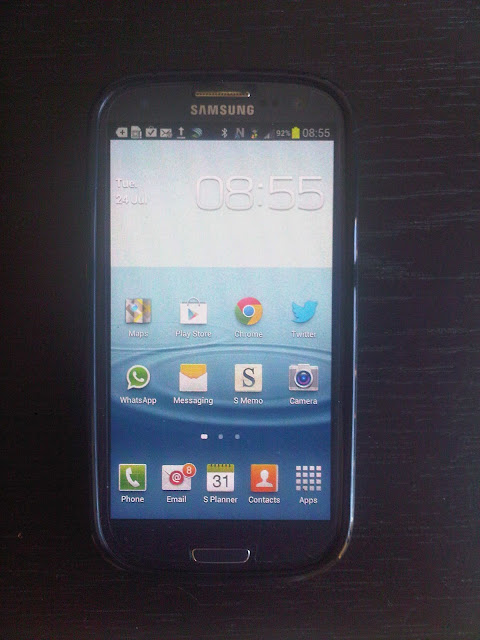 If you want to know what I've been doing instead of blogging recently, ask Sam.  If Sam could do anything actually useful like talk, he'd tell you about our long, heated arguments and our frequent and lengthy waits in the excruciating queue at the Orange store on the Champs Elysees.  And he'd tell you this in the sort of pikey accent reserved for drop-outs who wear trucker caps and jeans around their knees. Classy, Sam ain't.

I, on the other hand, am a class A fool:  A fool for falling for the hype that surrounded the launch of this much lauded apparatus. Everywhere I looked, Sam's praises were being sung. The c|net review was nothing short of rave, as was nearly every damn thing I read about it online.  The Samsung Galaxy S3 was calling to me and I was listening, despite its crass accent.

You see, I'd been hoping to replace my buggy BlackBerry with a smartphone that would help me develop my blog (how ironic) with a kick-ass camera, while allowing me to run the business of my life with easy PC syncing.  "Pas de probleme" came the assurance from Benjamin at the Orange store.  So, giddy with the idea of owning the latest bit of hot tech kit, I shrugged off my final reservation about touch-screen typing (as Benjamin also explained, the screen size would make the keypad easier to use than an iPhone) and with a Woo! and a Hoo! I left the Orange store proudly clutching Sam.

When I say clutching, I mean it.  Sam is a big boy, requiring a full stretch from thumb to finger to hold in place.  Instead of specifications like RAM and Megapixels, the box should have included Optimal User Hand Size and a warning: "Not suitable for glove sizes 7 or under."  But the way the display model was mounted at Orange prevented me from appreciating this until it was too late, and I was 10 minutes from the store, with hand cramp. 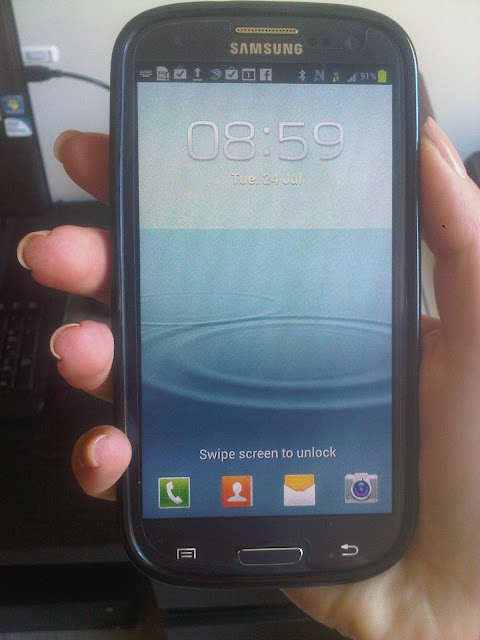 The problem with Sam's size wasn't just limited to physical discomfort (as if that wasn't enough).  My thumb couldn't actually reach across the screen to swipe (and you need to swipe, not just press) the 'answer' icon when the phone rang.  Unless both my hands were free to engage in manual gymnastics, Sam kindly ensured that all my calls went straight to voicemail.  Even when using other, less urgent apps, my (not exactly stubby, thank you) thumb simply couldn't reach everything it needed to. Bigger might be better, except when it isn't. 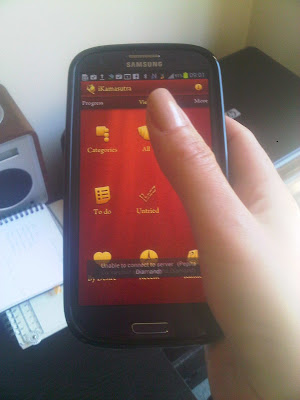 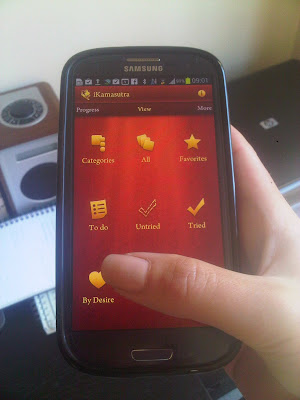 The saving grace of Sam's size was meant to be the keypad, which definitely felt more comfortable to use than an iPhone's, but unpredictive text and the lack of a spellcheck rendered my ability to communicate null and void. 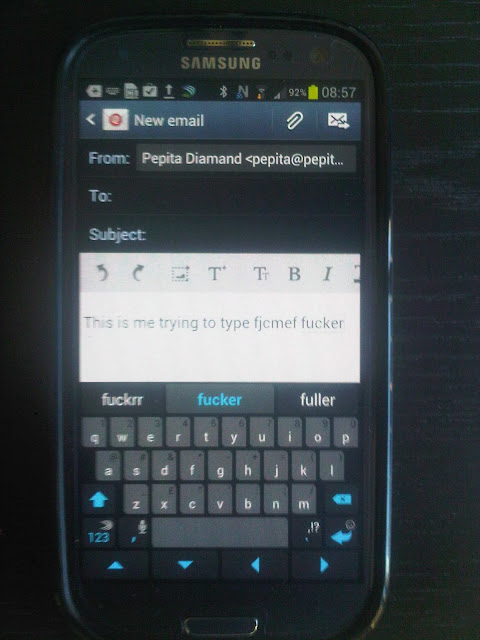 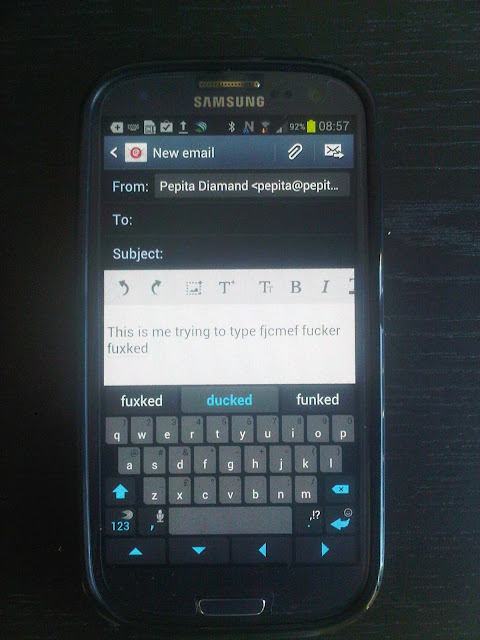 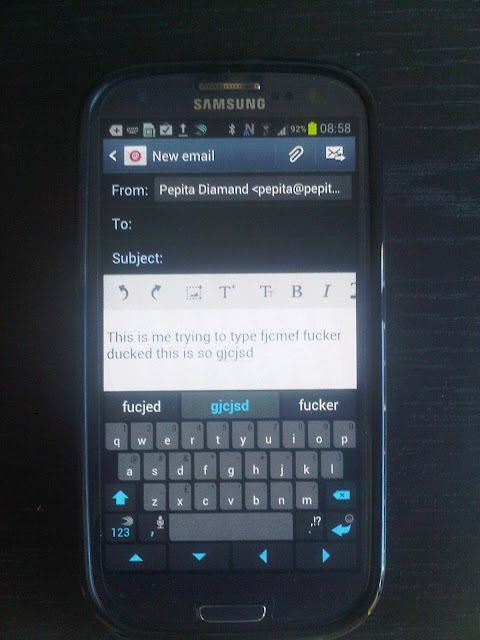 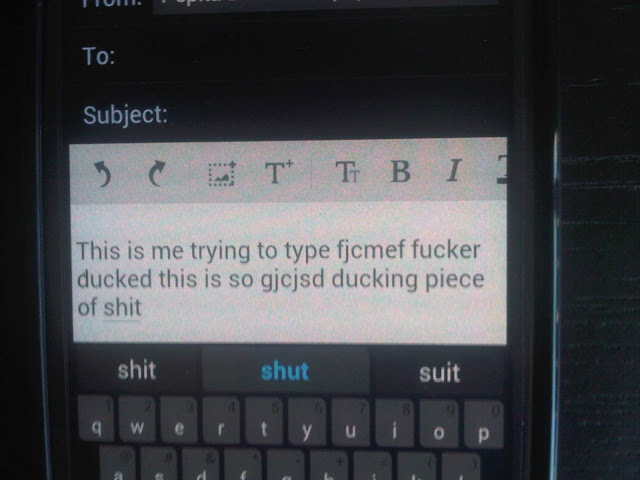 That a rake like Sam couldn't keep up with my potty mouth was almost the final straw.  The actual final straw was my inability to synch the ducker with Outlook as I'd been promised.  In total I wasted nearly four days of my life downloading programs and drivers, reloading programs and drivers, researching forums and crashing my computer before I finally found a thread buried in a chatroom somewhere that said the Samsung Galaxy S3 has problems syncing with PCs running Windows 7 on a 64 bit operating system.

And what did the good people at the Orange store do when presented with this piece of information? Nothing. Nothing, that is, except make me wait in line for hours, time and time again, just so that different people could give me the same non-answer. It wasn't until yesterday and my nth weary appearance at the store, that I was finally able to convince a manager that if he didn't take Sam back, he'd have a serial killer on his hands.

Style File Followers Take Note:
1. Call me a snob but there's just something down-market about Sam despite the high price. He's more hip-hop and gaming than communications and productivity. Not that a gal can't like a bit of rough, but if it's going to be a long-term relationship, rough's got to come with a brain.
2. Okay, you caught me:  That's iKamasutra.  I just downloaded it for the music. I swear.
3. Sam's camera was awesome.  (Which has nothing to with iKamasutra, fyi.)
4. That's how hard I tried to make my relationship with Sam work: I am now au fait with the term 64 bit operating system.
5. If you're having deja-vu about Orange's non-customer service, see this previous post.
6. I know, I know.  You're all saying iPhone...
Posted by Pepita Diamand at 15:13