Check out my new shades. 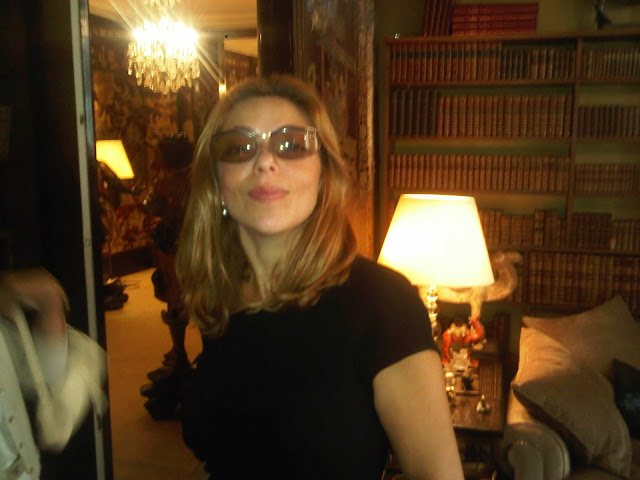 Those nifty sunglasses belong - or should I say belonged - to a certain Mademoiselle Gabrielle "Coco" Chanel.

Yes.  You read that right.  Those are Chanel's very own prescription shades, dating back to before her death in 1971.  These days they sit as she left them, on her desk in her perfectly preserved private apartment on rue Cambon in Paris. That is, until a curious Canadian like myself was invited to visit her hallowed halls.

If Chanel's apartment and atelier were open to the public, the public would form an enormous queue of pearl-dripping ladies and really camp men that stretched from the front door back to Charles de Gaulle airport. Foolheardy line-budders would be met with sharp swats from quilted handbags (from the men too) while everyone desperately awaited their turn to enter Chanel's sanctuary.  Such is the cult of Coco, that the house of Chanel has restricted entrance to the apartment to a lucky few, of which I had the luck to be one and the cheek to try on her glasses, naturellement.

Which, much to my post-visit "Let's google them!" frustration, don't seem to be either of these: 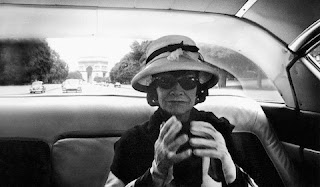 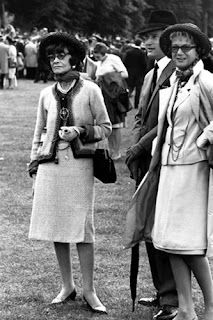 But that's neither here nor there.  What is there, in that apartment on rue Cambon, is a style of décor that's remarkably suited to many contemporary homes yet was completely avant garde in Chanel's day, mixing Oriental panels with western antiques and various flourishes which said more about her than her era.  Among her personal decorative motifs are the lion (she was a Leo, quelle surprise) and wheat, both a symbol of her country roots and a French jeu de mots denoting wealth.  In the same way that she imbued her fashion with such distinguishing codes as chains, bouclé fabrics and camellias, Chanel feathered her nest with distinct features which could only ever be her own. 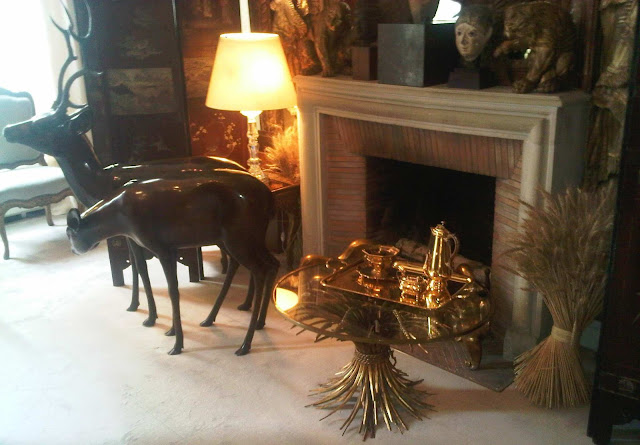 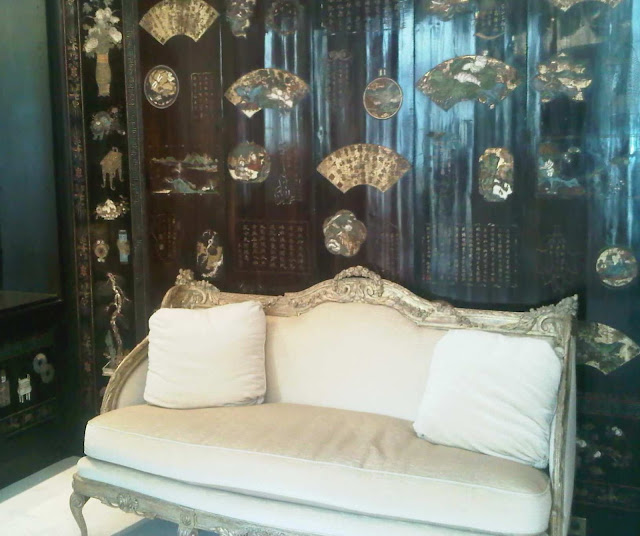 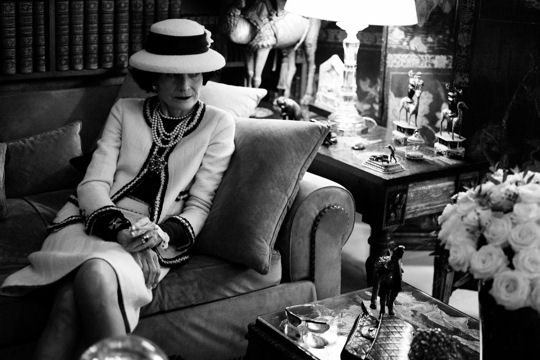 Another reason for keeping Chanel's private apartment private - apart from the desire to preserve its mystique, not to mention the white carpets - is that Chanel's actual ateliers, where 400 seamstresses and cutters toil to create some of the world's most coveted garments, are on the floor above.  That includes Karl's office.

The showroom, where couture fittings and private collection viewings take place, is as it always was, on the floor below, connected by a central mirrored staircase.  Victoria Beckham recently tweeted photos of herself and Karl posing on those very stairs: 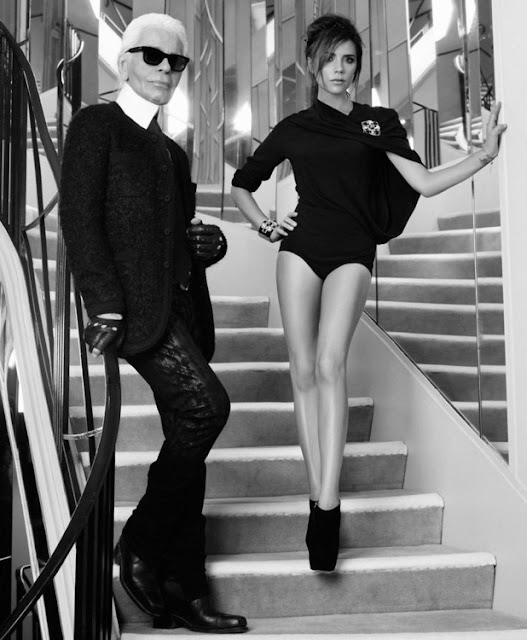 ...so it's only fitting that I should too. 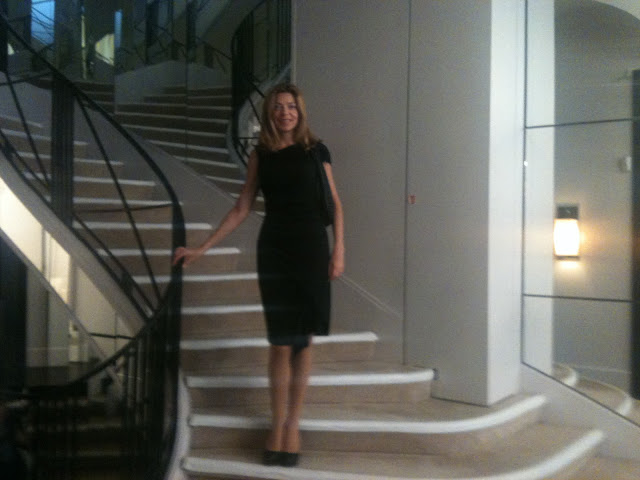 And here's a final bit of trivia for Chanel-obsessed fashionistas: It's on the fifth step up from the landing that Mademoiselle would perch nervously during her fashion shows, hidden from view but able to observe her audience's reaction in the surrounding reflections.  Here's Audrey Tatou sitting on the wrong step for the sake of a cinematic camera angle: 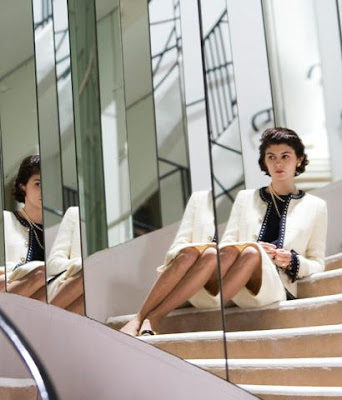 ...et moi, on the right step, wondering where I left those glasses. 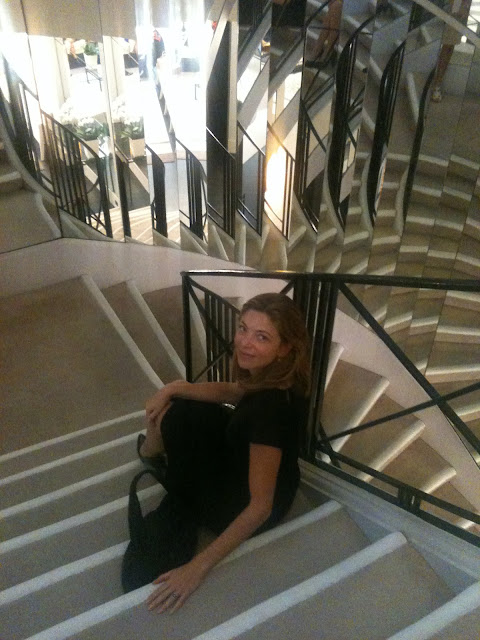 Style File Followers Take Note:
1. You see how the photos of me in Chanel's shades are fuzzy?  Imagine that blur, times 10.  Now you know what it was like for me to wear them.  Coco may have had vision, but she was blind as a bat.
2. My invitation to visit the apartment came from a dear Parisian friend of mine who is without a doubt the most beautiful and elegant (not to mention intelligent, being a business school professor) women I have ever met.  Think Jeanne Moreau in La Femme Nikita, but prettier.  One day I'm going to ask her to make me over. Until then I'm happy enough for her to share her incredible connections with me.  Merci M-FP!
3. I think I found them!  Look at the photo of Coco sitting on her sofa.  Check out the coffee table.  Those are the same glasses, n'est pas?
4. So maybe she didn't leave them on her desk after all. Hmmm...
5. No, of course I didn't nick them. The prescription was too strong.
6. Is it just me or do you also hate liking Victoria Beckham these days?
Posted by Pepita Diamand at 09:56 No comments:

Or rather, I saw Chloé.  Yesterday. 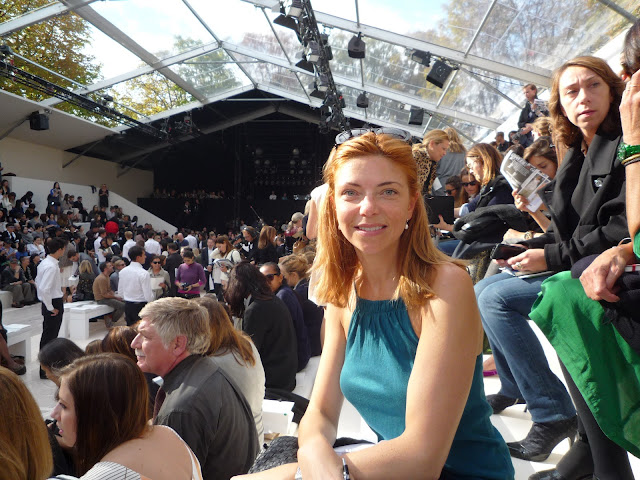 That's me waiting for the Chloé S2013RTW fashion show to get started in the sweltering heat of a semi-open-roofed venue in Tuileries Garden.  Thankfully, I've had enough experience to know to wear a twinset with a sleeveless base:  Fashion show venues - even ones without uncensored sunshine - tend to be saunas. By the end of the show, all that was left of the lady in the black coat behind me was a puddle clutching an iphone.

Why I'd decided to turn up relatively on time is anyone's guess.  The embossed invitation said 4 but it wasn't until around 4:30 that the first look appeared on the runway; standard practice in the teasy "keep 'em waiting, keep 'em guessing" world of fashion, dahling.  Not that my 35 minute wait was wasted.  Attending a fashion show (which in itself is rarely more than 5 minutes long) is as much about seeing and being seen as it is about seeing what the designer has (or would like to have) in store(s) next season.

Among the sights to be seen were Garance Doré, famed blogger and top-knot wearer:

...this model/starlet, also sporting a top-knot:

...and this harried looking fashionista, topped, of course, with a hairy top-knot.

The guy right behind her apparently noticed a small bird nesting in there, and, judging by his expression, it was having a poop.  As for the swathes of people behind them, the seated ones are thinking thank gawd I'm seated, while the ones standing near the rafters are thinking bastards.  A few of them are also congratulating themselves for spotting Anna Wintour (unfortunately, the guy in front of me stood up just as I was taking my Hey, That's Anna Wintour! shot) and those sitting around me were wondering who the heck was sitting below us and why were they so big in Japan? 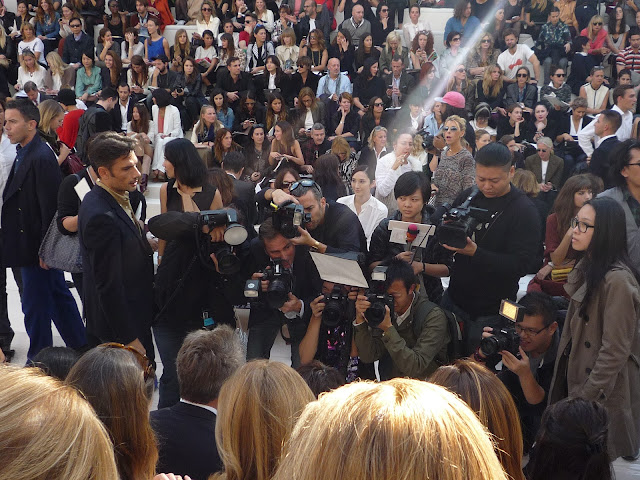 Style File Followers Take Note:
1. I know, it's an awful photo of me but it's the only one I got from the show.  And I swear... that's the camera angle...  My arms aren't really built for builder's work.
2. The hairdo-du-jour; the top-knot. The model/starlet carries it off well.  As for others I've seen, I'm not sure if 'fashion your own fez' or the 'junior school art teacher' look are really as flattering as their wearers seem to believe.
3. Okay, okay - whoever was sitting below us was probably being snapped by members of the Chinese press.  (The Alphaville reference was a moment of weakness.)
4. Oh, yes: The fashion show!  Chloé!  I thought the shoes were great.
Posted by Pepita Diamand at 17:00 1 comment: