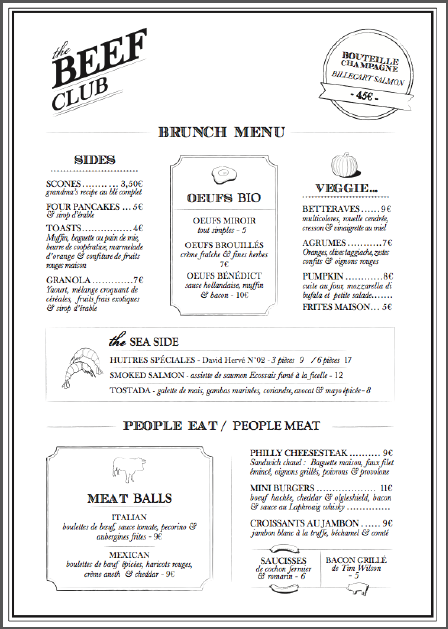 Style File Followers Take Note:
1. Once you saw the heading People Meat, I bet the words Meat Balls looked more menacing than usual.
2. That would be Gianni's coglioni and Juan's cojones, fyi.
3. That would make the Philly Cheesesteak too gross to contemplate.
4. Oddly enough, one of the movies shown on French TV during the holidays was Soylent Green.
5. "Where the people meet... face to face, dance cheek to cheek..." No matter how you spell it, people get eaten in that song.
6. I would like to take this opportunity to say a personal hello to, according to google analytics, my single Style File follower in Djibouti.
7. Make no bones about it: Le Beef Club is a very good restaurant with amazing steaks and a groovy cocktail lounge in the basement - and this is without a doubt the best looking brunch menu I've ever seen in Paris.  So if you're in town, go on and try it.  Just don't tell too many people: I suspect that a little cannibalism among friends might lead to a shortage.
Posted by Pepita Diamand at 18:49

Email ThisBlogThis!Share to TwitterShare to FacebookShare to Pinterest
Labels: Blondie, Paris, Pepita Diamand, The Beef Club, Where to Eat